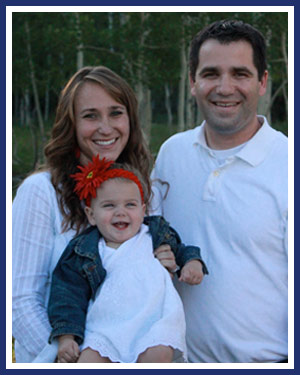 Lindsay and I had the privilege of meeting Ben and Jena Thomas at the 2011 National ALS Advocacy Day and Public Policy Conference in Washington D.C. Ben and I have an awful lot in common…

Nearly three years ago, Ben, from St. George, Utah, was enjoying a daring life of bike riding and canoeing when he noticed his left leg was not moving properly, and he was beginning to twitch.

Shortly after couple’s first child was born (a daughter named Emmerson), Ben was diagnosed with ALS. He was just 30-years-old.
Realizing that he had to value each moment of his life, Ben, who is now confined to a power wheelchair, told his wife that he wanted to write letters to Emmerson detailing their time together.

He explained: ‘I started writing letters to her at this stage of her life that she won’t remember, but also give her a glimpse of how I view things. I give her advice.’

Among that advice is ‘she can be happy no matter what’, Ben said with tears in his eyes.
Source: http://www.dailymail.co.uk/
Just days after diagnosis,
Jena began a blog titled Thru the Deep Waters

4 thoughts on “Letters of Memories and Advice”